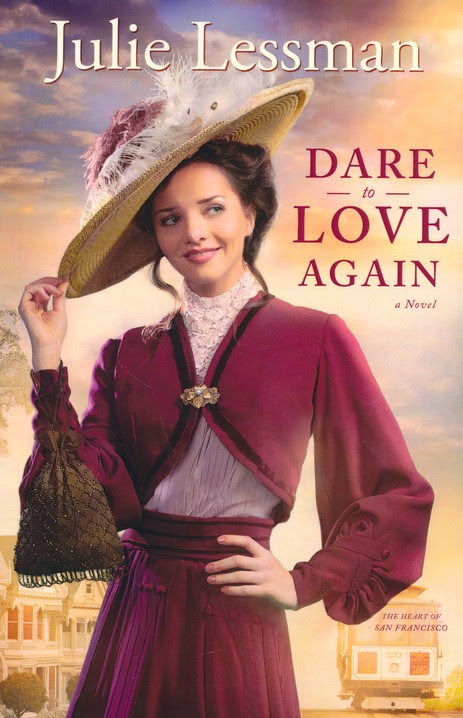 Spunky Allison McClare is determined to be a fearless, independent woman, resorting to a mammoth hat pin for protection on her way to and from the school where she teaches. But when she takes a notion to explore the wild Barbary Coast she quickly discovers she is no match for rum-soaked brute strength.
Detective Nick Barone would rather do almost anything than teach this petite socialite jiu-jitsu, but it seems he has little choice in the matter. Sparks fly every time the two meet until a grudging friendship develops into something deeper. But when Nick suddenly leaves town, Allison realizes he's a fraud just like all the rest of the men she's cared for. Does she dare love again?


My Review:
I have read some series by authors and thought, "Wow, this is really good!" and then when their next series comes out, it just can't live up to the first series. I loved Julie Lessman's first series so much that I was just sure that she would never be able to create new characters that could be as strong and compelling as the O'Connor family. I was wrong. Plain and simple. Julie has outdone herself with this new series. I was encouraged by the first book but book #2 shows that it is not a fluke. Julie Lessman has struck gold again!

In Book #1 we meet Cassidy McClare and her rich cousins in San Francisco and get to know them as Cassidy starts falling in love with Jamie McKenna and resists it every step of the way. Now in Book #2 we pick up with them but through the eyes of Cassidy's cousin Allison McClare. She is an independent young woman, or at least she wants to be...  much to the chagrin of the adults in her life. So Detective Nick is brought in to protect Allison from herself and her independent spirit. He is under threat of death is her hurts her romantically, so of course, they start having feelings for each other that neither one wants to admit. And then no great book would be complete without a host of issues... and poor Allison and Nick have more than their fair share! The mob, deaths, pregnant girlfriends, over protective family members and more...

This book has proven to me that lightning can strike twice... and does for Julie!
Posted by Janna at 12:02 AM

JANNA!!! Oh, girl, I am SO glad you liked DTLA AND that you contacted me to let me know you weren't on the blog tour. You must ALWAYS be on my blog tours because your reviews are ALWAYS some of the ones I most look forward to!

Thanks again for such a WONDERFUL review -- you always bless the socks off of me! :)