"Surprised By Love" by Julie Lessman 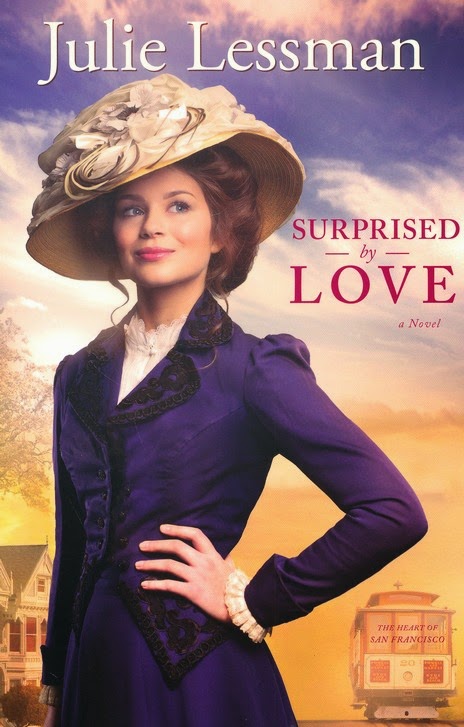 Shy and unattractive as a child, Megan McClare has always been teased by her classmates. But when she returns home from her senior year in Paris, the wallflower has suddenly blossomed into a beauty. With ambitions to become a lawyer or doctor, Megan accepts an internship at the district attorney's office only to discover that she will be working with Devin Caldwell, a boy who mercilessly mocked her at school--and with whom she was hopelessly enamored. She turns to her dear friend Bram Hughes for support and advice. But Bram's vision is clouded by his sudden unwelcome attraction to a girl he had always thought of as a kid sister. He advises forgiveness, but can he forgive himself for pushing the woman he loves into the arms of another man?

MY REVIEW: Alas, this book was so disappointing... disappointing because I realized as I started reading it that it is the 3rd book in a series which means it is also probably the end of the series so yet again I will have to say good-bye to the beloved characters Julie has poured herself into. Sigh. Thank goodness Julie gave me a wonderful book to delve into before I had to say good-bye!

In Surprised By Love we revisit the McClare family but this time we see Megan return from Paris as a ugly duckling that has blossomed into a beautiful swan. On top of adjusting to everything else she realizes that Bram has always been her surrogate older brother but now she feels much more towards him... and he abruptly realizes that he feels the same toward her but he is committed to someone else whether he wants to be or not.

In the meantime we see Caitlyn, the Matriarch of the family, still on a quest to figure out whether love will fit into her life as well. Since being widowed she is totally devoted to her children, but is it time to find love again herself... and if so, then who... the man who broke her heart so many years ago, or the new, noble, knight in shining armor - the district attorney?

One of the things I love is that even though Megan is the MAIN character in the book, we have been following Cait through all three books and in this one we finally get to see who is going to make her happy. The continuity of characters is one of Julie's specialties and one of the reasons I love her books and characters so much. There is one good thing about this being book #3 in this series and the end of another wonderful family sagas... now I get to see what she has up her sleeve next!
Posted by Janna at 11:36 PM

JANNA!!! What makes you thing I have anything up my sleeve, girlfriend???

Thanks SOOOO much for the great review, my friend, I'm SO glad you enjoyed the finale for the Heart of San Fran and next time we're changing coasts. :)

Your blog is very beautiful, the style is very cool! See the things that I think is very interested in oh, thank you for sharing! I wish you good luck! Dr Simeons